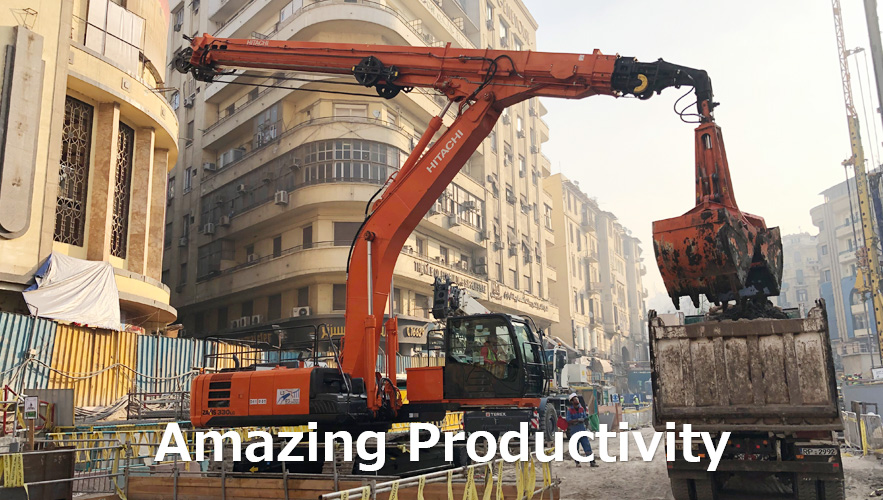 The Cairo Metro in Egypt’s capital is the first underground railway to operate on the African continent, managed by the national authority of tunnel and supervised by the minister of transport. It currently includes three routes, numbered Cairo Metro Line 1-Line 3, and is being significantly expanded in order to relieve traffic congestion caused by population growth and higher vehicle numbers in recent years. Part of that expansion is the Cairo Metro Line 3 Phase 3 project, the focus of this article.

Line 3 Phase 3 involves constructing an 18 km extension including 15 stations, and is planned for completion in 2021. This large-scale project has been undertaken by an Egyptian-French joint venture comprising four companies – Vinci Construction Grands Projects, Arab Contractors, Bouygues Travaux Publics, and Orascom Construction. At its peak, the project will employ 3,960 people.

Hitachi’s relationship with the joint venture began with the latter’s founding in 2016. The JV has a total of 21 Hitachi machines, including nine 7-35t hydraulic excavators and 12 wheel loaders over three models, which are all at work on the Metro Line 3 Phase 3 project. Among these, the two telescopic arm ZX330LC-5G 30m machines were introduced for this project, marking the first-ever usage in Egypt of Hitachi telescopic arm excavators.

Because the Metro is being dug deep underground, the resulting sand and mud needs to be conveyed back to the surface. This critical job has been entrusted to the telescopic arm ZX330LC-5G 30m machines. According to JV L3-Ph3 Workshop Manager Mr. Julien Sublet, increasing spoil removal efficiency is the key to project advancement. The telescopic arm machines operate approximately 20 hours per day, and have already moved a total of approximately 75,000m3 of spoil since the first unit was introduced in August 2018. Mr. Sublet commented, “We are very satisfied with the performance of the two telescopic excavators, especially their production output. They really outshine alternatives from other brands and the results are amazing.”

In addition, careful consideration has been given to site safety. The telescopic arm ZX330LC-5G 30m machines are fitted with hose rupture valves, which enhance safety. Hose rupture valves are fitted to the lifting cylinder, and are safety valves preventing the boom from suddenly dropping, even in the unlikely event of a hose breakage. Mr. Sublet stresses that it is important to not only increase efficiency, but also to ensure site safety.

Finally, the operators are proud that they are the first in Egypt to use these machines.
Hitachi Construction Machinery is also proud that its machines, having traveled halfway around the world, are making a strong contribution to the success of the Cairo Metro project.

“We are very satisfied about the performance of the two telescopic excavators and even more about the production they are making. They really outstand other brands alternatives and the results they are giving are amazing.”

*Operation is carried out with the door open specifically for photo shooting purposes.
Operator looking underground through the window on the cab floor
A window in the floor of the cab gives a better view of the site below.

Go to top of page